Robert Dietz of the National Association of Home Builders explains the positive trend of new home sales as of recent.
Contracts for new home sales expanded by 6.1% in February, according to estimates from the joint data release of HUD and the Census Bureau. The growth in sales continues along a positive trend for the market, which is supported by solid job growth, improving household formations, continuing favorable housing affordability conditions, and tight existing home inventory.
The seasonally adjusted annual pace for February new single-family home sales was 592,000. This is 6.1% better than January and a 12.8% gain over a year ago. A mild winter in much of the country likely supported this year-over-year improvement. 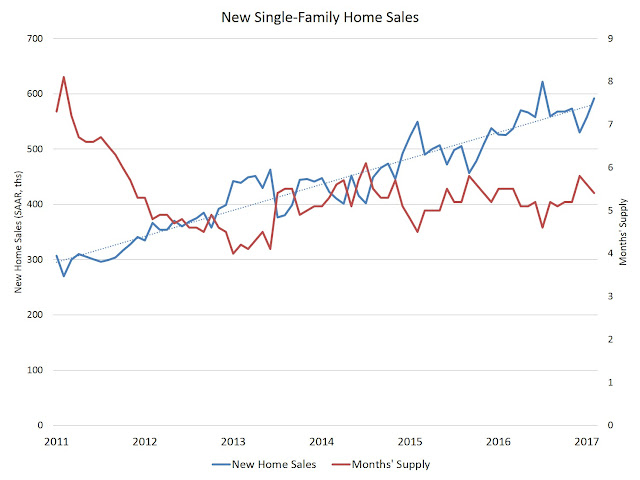 Inventory growth continued in February. After hovering near 240,000 for most of 2016, inventory has now risen to 266,000 homes. The current months’ supply number stands at a healthy 5.4. Given tight existing inventory, more new homes are required to meet housing demand.
The most recent data also indicate a growing share of homes not-yet-started in builder inventory. For example, on a year-over-year basis, homes under construction in inventory have increased by almost 6% over the last year. Completed, ready-to-occupy homes (there are only 63,000) are up 5% since February of last year. In contrast, homes not-yet-started listed in inventory have increased 42%, from 36,000 in February of 2016 to 51,000 last month. 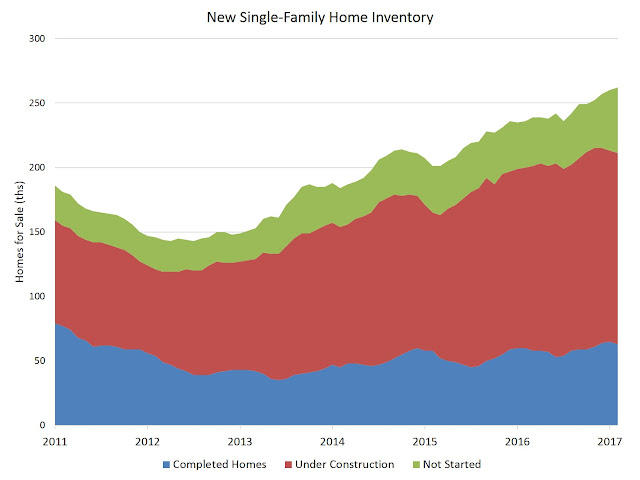 Pricing data in the February report suggest recent growth at two ends of the market. Median new home sales price (price of the home in the middle of the distribution) fell to $296,200, consistent with inventory broadening. On the other hand, average home price jumped to $390,400, which appears to have occurred due to growth in sales priced $750,000 or more. This divergent price effect in the data also occurred due to a decline in home sales priced between $300,000 and $400,000.
Regionally, all areas except the Northeast saw monthly growth in sales, with notable growth of 31% in the Midwest. Sales in the Northeast were down 21%. Smaller growth of 4% and 8% was recorded in the South and West respectively.
Solid builder confidence and ongoing tight inventory conditions suggest continued growth for single-family construction in the months ahead. Pricing remains an open question, given rising construction prices and increasing interest rates. New homes will need to be competitively priced, even as prices for existing homes continue to grow. For this reason, we continue to expect a broadening of the new home inventory base and slight declines in median new home size.
Posted by Sandy Meadows at Tuesday, April 25, 2017